LED stands for Light-Emitting Diode and is a semiconductor light source.  LEDs are used as indicator lamps in many devices, and are increasingly used for domestic and commercial lighting.  An LED is a semi-conducting device that produces light when an electrical current flows through it.

Basically, LEDs are just tiny light bulbs that fit easily into an electrical circuit.  But unlike ordinary incandescent bulbs, they don’t have a filament that will burn out, and they don’t get especially hot.  They are illuminated solely by the movement of electrons in a semiconductor material. Introduced as a practical electronic component in 1962, early LEDs emitted low-intensity red light, but modern versions are available across the visible, ultraviolet and infrared wavelengths, with very high brightness.

Energy-efficient lights consume up to 90% less energy than conventional incandescent bulbs.  Common in digital clocks, remote controls, watches and appliances, they are now being produced in bulb form as a home lighting alternative. 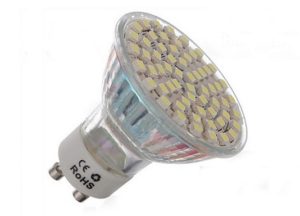 LEDs have several advantages over conventional incandescent lamps.  For one thing, they don’t have a filament that will burn out, so they last much longer.  Additionally, their small plastic bulb makes them a lot more durable.

But the main advantage is efficiency. In conventional incandescent bulbs, the light-production process involves generating a lot of heat (the filament must be warmed).  This is completely wasted energy, unless you are using the lamp as a heater, because a huge portion of the available electricity isn’t going toward producing visible light.  LEDs generate very little heat, relatively speaking.  A much higher percentage of the electrical power is going directly to generating light which cuts down on the electricity demands considerably.

LEDs are a more cost-effective lighting option for a wide range of situations.  While they may be more expensive than incandescent lights up front, their lower cost in the long run can make them a better buy.  In the future, they will play an even bigger role in the world of technology.

LEDs present many advantages over incandescent light sources including: